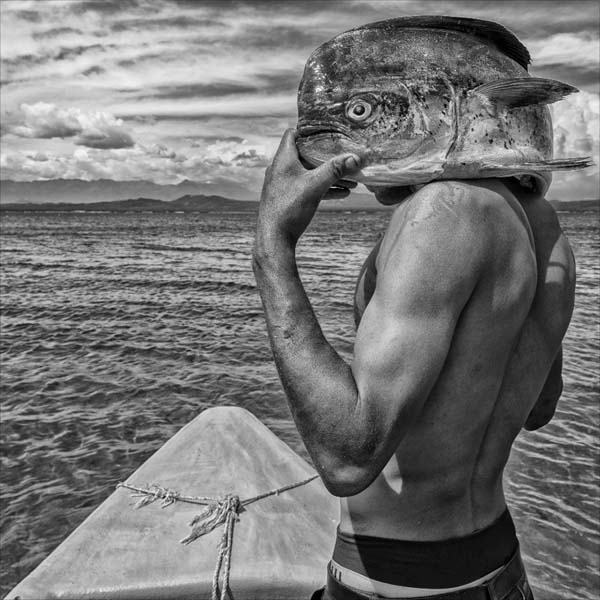 The show speaks of the intricate and mythical relationship between man and the sea. The images are full of symbolisms evoking beliefs and common elements between distant and close cultures such as the Taino, the Caribbean, the Afro, and the European and allude to the mysticism of one of the oldest professions -fishing- where faith is the motivation and unifies the community daring to take this daily journey.

In an interlacing of images, Fiat Pisces tells us -in an environmentalist language- the interdependence of the artisanal fisherman with a delicate ecosystem. In them, the sea workers and prey engage in an incessant dialogue; embodied in surrealist constructions loaded with humor and local astuteness as in the images titled: “The Secret, Where I put my gaze… I put my heart…”. In others, Genaro raises the voices of the fish as in the photos titled: “They Went Over There, Fish Latch, and We Have to Talk”. In these, the fish’s silent voices are transcribed in images so that we can listen to them in a visual language full of salted and refulgent nuances.

The artist weaves a visual network capturing shaded silhouettes and achieving a metamorphic synthesis between man and beast where their mutual argentine skins melt and form a substance of continuity, evoking anthropomorphic mythical beings such as the Minotaur, embodied in the compositions titled “Upa, For love, and Braque”.

With amazing naturalness, the photographic artist Pedro Genaro has probed -for more than a decade- both sides of the nets, capturing in salts of silver the essence of the salted sea uniting and separating us, as the fisherman of his fish and the shore of the island and the continent. Creating his own salted and silver sea of images that unite us in one voice of faith and hope, declaiming the mystery of creation: Fiat Pisces!

Presented with the support of the Office of the Executive Director the Dominican Republic and Mexico at the IDB.