Opening: The Language of the Heart – Ezequiel Taveras (Dominican Republic) 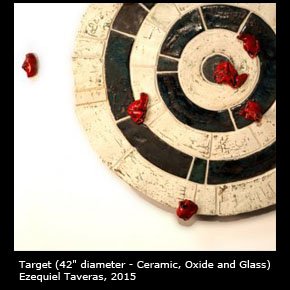 The Reverend Martin Luther King, Jr., once said: “Occasionally in life there are those moments of unutterable fulfillment which cannot be completely explained by those symbols called words. Their meanings can only be articulated by the inaudible language of the heart”.

Dr. King was speaking to an unequal, divided, and hateful, almost savage world. But man’s capacity for optimism and faith, and to overcome adversity are so beautifully encapsulated in his statement that they could not be more uplifting or appropriate when presenting the exhibition of Dominican artist Ezequiel Taveras. No matter how much the human being succeeds in conquering shortcomings, it seems there are always more on the way to confound all efforts to overcome them. Charlotte Bronte cunningly characterized prejudice as weeds overwhelming the heart of the uneducated. Vincent Van Gogh, who constantly struggled to find inner peace, concluded that, “As we advance in life, life becomes more and more difficult, but in fighting the difficulties, the innermost strength of the heart is developed”.

We are confronted now with the paradox of putting into words an avalanche of notions that Taveras sensibly transforms into visual cyphers, using objects made out of clay, ropes, and wire, composing an “inaudible” vocabulary of symbols that speaks out loud, poetically and mysteriously, about life’s contradictions and the disproportionally unbalanced world humanity has created, and about the resilience of the human spirit as well; Albert Camus reminds us, “A man’s work is nothing but this slow trek to rediscover, through the detours of art, those two or three great and simple images in whose presence his heart first opened”.

Through history – the parts we know of it – humans have assigned an unparalleled role to the human heart, even before the development of science and related disciplines. Of all the delicate organs that structure the complex physiology of the body, the heart – more than the brain – has baffled curiosity, occupying a position of enormous importance in the development of civilization, with physical and metaphysical implications.

In the biblical language of Judaism, the heart is the seat of life, but the Hebrew sees the body and soul as a unit, undivided, and – when speaking of the heart – they refer to the center of man. Plato considered it important to listen to the voice of the heart, because all the sensitive components of the body respond to it. For the ancient Egyptians, the heart was the core of man’s moral consciousness, and for this reason had to be tested before being granted passage through the underworld. The heart was the only internal organ left in the body during the process of mummification, because the Ancient Egyptians believed the heart  not the brain  was the organ of reason, and the deceased would need it in the afterlife to attest to his character. In many ancient cultures, soldiers ate the heart of their enemies as a way of appropriating their courage and spirit. The heart is also shown in depictions of ancient Meso-American sacrifice, often carved in stone, appearing as an offering to the sun god. For the Mayans, Hunab Ku was the center of the entire galaxy and of time, the heart and the mind of the Creator. For the Aztecs, the heart was the knot that bound the spirit to matter and the soul to the tools. The heart held the soul. They believed the heart represented motion and was the witness of men and their relentless wandering.

There are many parallels to the intrinsic relationship between the physical heart and the essence of life or the spirit, and they come to mind at the historic moment we all are witnessing, being again subjected to an unequal, divided, and hateful, almost savage world. When many of us thought that, after so much struggle, the injustices of the past had been finally atoned for, many sectors of humanity are still subject to prosecution, stripped of their self-respect and the right to live and work in peace. The heart has become more than a symbol, and much more than a concept: it is a vehicle that frequently defeats reason to grasp the abstract; it is a vessel that contains life, emotions, the deepest feelings, and even our sense of God.

Taveras is an expressionist and a romantic, not in the same terms that the schools in the history of art have established, but rather as a matter of temperament, despite the apparent contradiction. From this perspective, his work is associated with the impact that the European Trans-Avant-Garde had on Latin America during the 1990s, but – more importantly – with the personal assumptions that artists in the region combined and reconciled under its influence. From that point of view, Taveras is one of the most relevant artists to emerge from the Dominican Republic subsequently – and one of the few at the hemispheric level, ranking with the best original group to work in the ceramic medium – amongst notable figures such as the Peruvian Carlos Runcie Tanaka.

One of the essential aspects of his work is the dialogue that it generates visually with the viewer, not literally, as frequently occurs with conventional conceptual art, but through the powerful poetics that the work embodies, thanks to the sensuality in the handling of the materials, and the ingenuity displayed in the articulation of feeling, a feeling sometimes associated with human tragedy and the possibility of transcending it, as tragedy itself has become a viciously induced, daily occurrence in our lives.

Taveras makes it clear when in his own words he says, “I think that all my work is supported by the use of symbols, but the images I use exceed, in many instances, the qualities of the symbol in itself. Rather, my heart retains, as in many of our primitive cultures, the extrapolated abstract qualities beyond its physical condition. In my work, the heart becomes a leitmotiv that keeps hold of multiple characteristics above and beyond its natural ones, and the trivialized, simplified, graphic icon that we are familiar with”.

The words of Zelda Fitzgerald serve as both a pause for reflection and forewarning; along the many journeys we undertake when confronting the work of Ezequiel Taveras, “Nobody has ever measured, not even poets, how much a heart can hold”.