Opening The Identity of the LINE – Juan Luis Landaeta (Venezuela) 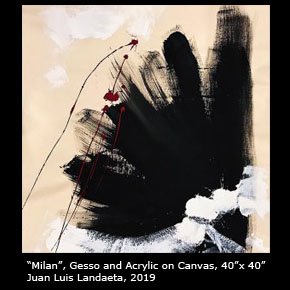 The Line: A Body Erased

“The identity of the line has its origins in the prehistoric period. It consists of a movement preceding any record of itself, a movement which seems to grow, with obscure patience, from the very roots of memory.

A line is about movement embodying the very definition of direction, it’s about making sense of it all, and aims to portray what it means to _be_ a certain body in a certain place.

Line: inexhaustible and indivisible series of dots, endless succession of infinitesimal spaces that won’t reveal its end. Juan Luis Landaeta’s pieces take hold of the line and make it burst: each painting is a line taken to its last consequences.

Blown-up and blurred, coarse and uneven, the voracious line within each of these paintings expands over the canvas with no fear of contrast, with no respect for symmetry.

No longer is the line a limit, or a border, nor the proverbial line which so we’ve been toldprovides an origin for history; rather, what is portrayed in these pieces is a line against the storyline, a line embodied, radical in its own materiality, and capable of becoming both stain and stammer.

A line disowning time, a line moving rapidly towards that prehistory (anti-history?) that saw it come to life. A line tracing a new identity for itself: a body sketched within the erasure marks that plow through it.”