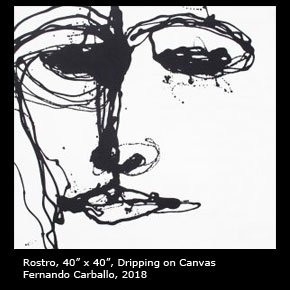 It is not uncommon in Costa Rica to pigeonhole artists in a certain period of their work by individuals writing and constructing the history of Costa Rican art. I would say, a mistake, because some artists -like every human being- change depending on their life-circumstances and the same occurs with their artistic work. This is what happened with Fernando Carballo who made himself known in the seventies in the context of the National Visual Arts Galleries (1972-1993) created by the Ministry of Culture, Youth, and Sports (1971) which is currently the Ministry of Culture and Youth. Since then, Fernando Carballo opted for the graphic, for the drawing which -for the art critic Marta Traba- would define the most precise language concerning the aesthetic of Latin American art, a region struck by the violence of dictatorships and the war, but also with an indigenous past belonging to the so-called Mesoamerican, intermediate, and Andean areas.

Well then, not limiting his work to local art, the work of Fernando Carballo inserts the Latin American context starting from the seventies to the present with all its force of black and white drawing, to color. And, always centered in a “monstrous” figuration, in a figuration towards the “deformed”, towards the grotesque, towards ugliness. While highlighting his homoerotic ardor, as few have dared to do so in a country of colonial prejudices and heteronormative. And if that is the case, important references appear as part of the formation of his work such as Käthe Kollwitz, Leonard Baskin, and Paul Wunderlich. It’s important to note that these references contributed positively to the work of the artist, unlike certain art historians, scholars, and critics who use this discourse about influences to delegitimize the work of which they are referring.

Now, “dripping” or “pouring” are part of Action Painting within the language of American painting that was generated during the postwar period. A “painting as an act of pure existence, of free intentionality through matter and gesture” [i]. It is a painting that is not created on an easel, but instead on the floor, as for example the case of Jackson Pollock.

Following the series Galería de Familia (1985), a series of spatulate faces with offset ink appear in 1986. In these first “experiments”, the artist resorts to the use of enamel or liquid paint as a medium, allowing a freer and more gestural stroke through the drip. A purer line as the artist would say-, evoking the drawing of the master Juan Manuel Sánchez.

Carballo’s interest in this resource continues over the years and in 2009, he presents his exhibition Esmaltes (Enamels). In 2017, he produces another series of faces, ten of which are in industrial acrylic on Canson 200 cardboard. In the words of the artist: “I use a soft plastic bottle with a device as lid with an opening through which the paint flows in a stream that I am moving over the surface of the cardboard that I have placed on the floor. They are made in a single session of two to five minutes. When I started these “experiments” I made them on the table, trying to give details, ears, fingers, hair. For a long time, I have tried to make the line and the drip have more presence as such, regardless of following a drawing, and I think it could take that intention to a type of abstraction.”