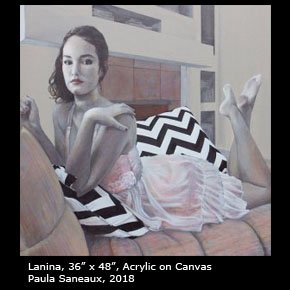 The definitions of Body (corpus) in Western society are broad and often contradictory. Since depending on the approach, we find aspects of a physical-aesthetic nature coinciding with cultural and spiritual factors, particularly concerning spiritual or philosophical conceptions. Michael Foucault and Merleau-Ponty did great studies on the use of the body through history. As a result, we understand that the body -like any other element- is dialectical and has many interpretations and symbology, depending on the context, beliefs, and prejudices of its creator. In terms of the visual arts, the permanence of its discourse will be sustained on the element of multiple readings given by the observer over time. In as much as the work permits this wealth of readings, the permanence of its discourse will remain, giving way to its evolution with history and at the same time with its own history. Currently, figuration and traditional techniques have returned, seizing the contemporary art discourse and destabilizing the hegemony built around an overestimated conceptualization to the detriment of the technical aspects of the work itself.

More than a figurative-narrative element, the body in the work of Paula Saneaux is an iconography that supports a story, a conflict, and an existential experience. Hence, we will appropriate Foucault’s approach when he says, “The body is the place where they depict the avatars to which life is exposed. The vigor or weakness of the body, its health or its impairment. The body is far from being an autonomous substance: it is constituted by its environment, by its food, its habits, everything that is per-forming or modeling. By the way, the body also inscribes in itself the culture in which it develops and that consequently translates into diverse meanings. In that sense, the body lives in a manner consistent with the discourses with which it is conformed and the precepts that give it a place and a specific role. Thus, the body is also a receiver of the truth or, rather, the truth is also susceptible to incorporation, that is to say to incarnate, it is the body that supports, in its life and its death, in its strength and in its weakness, the sanction of all truth or error.” 1 Similarly, Merleau-Ponty considers that “The body is a tacit and primordial symbolism, because it finds all artificial symbolism, so that it opens us to truth and ideality.” 2 Moreover, an important aspect of Paula’s work is the symbolic element within a history and the body’s history. As stated by Nietzsche, “The Genealogy is found in the articulation of the body and history. It must show the body impregnated with history and with history as a destroyer of the body.” 3 In Paula’s work, this historical interaction produces an emotional effect, transporting us through different states or levels of consciousness.

Paula Saneaux depicts a stream of emotions and existential conflicts about the women of her time. Her skin travels through them -mimicking and transmuting every act of violence, aggression, suffering, conflict, degeneration, pain and happiness dragging us into that flood of feelings. Paula efficiently handles her techniques, imbuing the drama and calamity with intimate beauty. She projects, involves, and eventually represents herself through each of her models without removing or altering their stories or personalities. Paula experiences their stories as her own and recreates them with her nearly monochrome palette, where color -when it exists- is a mobile that pushes viewers to question or reconstruct ideas through their own stories.

Paula delivers a candid approach without being moralistic, where questions -more than judgements- arise when encountering her work today and through time because her subject matters are eternal conflicts of humanity.