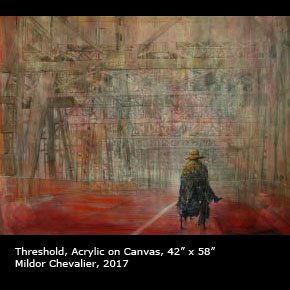 “For the past three years, I have been creating this body of work that orbits between the idea of belonging and solitude. I created worlds with fragments of my personal experience and depicted situations that speak to the human conditions uniting us. After almost two decades outside of my native country, Haiti, I now understand that being an immigrant is not a status, but a continuous living experience. I was inspired by gathering memories of my personal experience as an immigrant, like my first twenty-four hours in the Dominican Republic back in 2000. I remember waking up that first morning not knowing where the sun rose, and the same happened in 2010 on my first morning in New York City. Such circumstances come with waves of unanswerable questions about my dreams and reality, and they become images.

I created imaginary architectural spaces with visual elements that assemble architectural and natural forms. In some of the work, I situate people interacting and alone inhabiting the spaces that reflect my own desires. Working with a media such as painting (acrylic on canvas) allowed me to tell my story in a way that connects to viewers directly and immediately.”

Whether through painting, drawing or sculpture, Mildor generally creates scenes that explore human experience, wishes, and dreams. His multi-cultural experiences give him access to the world of global art and he has become an international artist with individual and collective exhibitions, biennials, and art fairs in important galleries from Haiti to Quebec, from New York to Shanghai, from Paris to Santo Domingo. His work is in private collections in the Dominican Republic, China, and around the world.

Born in Haiti in 1982, Chevalier lives and works in New York City (NYC). Mildor grew up watching his father in his carpentry shop and his mother teaching his students macramé and drawing patterns to make clothes, so he developed a passion for the art. In 1999, he took drawing and painting classes at the Grotte Des Arts Plastiques school in Port-au-Prince. A year later he moved to the Dominican Republic and in 2010 obtained an Associate Degree in Fine Arts from the School of Design at Altos del Chavón. After graduating, he received a full scholarship to study at Parsons the New School for Design in NYC, where he obtained his Bachelor of Fine Arts. He has a Master of Fine Arts from the Fashion Institute of Technology in NYC.