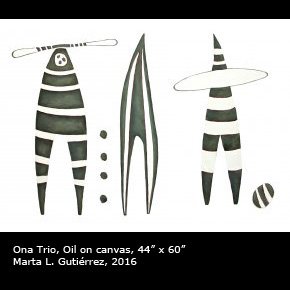 Inadvertently or by mere circumstance, all species prey on others that become unsuspecting enemies. Beautiful Selk’nam people and sheep, pesky rabbits and rose gardens, smart crows and its target, all have something in common: an arbitrary relationship of predator and victim. The rise of Innocent Enemies in colonial history and in nature, inspire these new works by Marta Gutiérrez, recreating in naïve abstractions the familiar perversion of an apparently balanced ecosystem.

Born in Medellin, Colombia an architect by training, Gutiérrez earned her BFA from the Corcoran School of Art in Washington D.C. In her work as a painter, sculptor, as well as a furniture designer, Gutiérrez brings multiple disciplines and media to bear. Her work is always informed by her constant search for abstraction and techniques that reflect her varied professional background. She has participated in several group shows and has exhibited in galleries and museums in the United States and Colombia. Gutiérrez has her studio in Washington D.C.

This exhibition is presented in collaboration with the Embassy of Colombia.