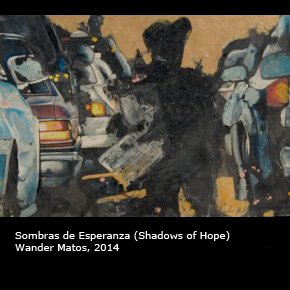 We invite you to the opening of this solo exhibition by Dominican Republic artist Wander Matos on Monday, July 13, 2015 at 6:00 pm, highlighting the daily life of the barrio and inviting us into a deeper reflection of identity inspired by the personalities captured on the canvas. The exhibition will remain open until Friday, July 24, 2015.

My works are nothing more than emotions and memories in an attempt to re-question the concept of identity, a process that is always based on the experience of daily life, which through a realization with the artwork becomes a creative experience and continues through an immense struggle with the material.

Matos was born in the city of Barahona, Dominican Republic, and became attracted to drawing at the age of four. As a young man, he moved to Santo Domingo to live with his aunt. At age 20, he joined the Art School at Universidad Autónoma de Santo Domingo and received a scholarship to attend the Altos del Chavón School of Art and Design, where he graduated with honors. Matos has participated in cultural exchange art programs with the National School of Plastic Arts at Universidad Autónoma de Mexico in Mexico City. He has taken part in biennales and has won many painting competitions.