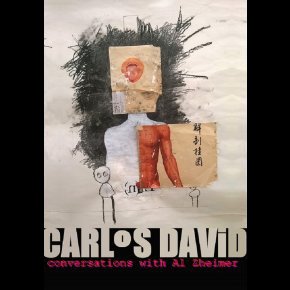 During the late 50’s, Carlos Díaz-Sosa was a journalist living in Paris who met and interviewed key figures such as Pablo Picasso, Jean Cocteau, Salvador Dalí, Albert Camus, Gabriel García Márquez, Pablo Neruda, and many now influential Venezuelan artists, such as Carlos Cruz-Diez and Jesús Soto, who were living in Paris at the time. The collages in this exhibition are records of those stories. Presenting clues at times encrypted and other times apparent- the material here assembled displays Díaz-Sosa’s interests as an avid collector who faithfully recorded his travels and experiences of the world.

Born in Caracas, Carlos David now lives and works in Paris and London. He has exhibited internationally for over twenty years, producing political and satirical paintings borrowed from the language of graphic novels and popular culture. Referencing philosophy and black humor, his works are a sardonic blend of political commentary and film noir. Carlos David graduated from Chelsea School of Art in 1984 and Winchester School of Art in 1994. His works can be found in the permanent collections of the Art Museum of the Americas (AMA) in Washington, D.C. and the Museum of Contemporary Art in Caracas, Venezuela.