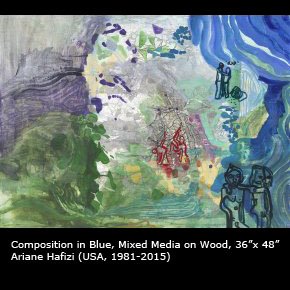 Natalia Ariane Hafizi-Marianovich was born on July 9, 1981 in Boulder, Colorado and passed away from breast cancer in 2015. She was the only child of Bahman Hafizi and Carmen Marianovich. Bahman is an Iranian-born physicist and Carmen is a Uruguayan software engineer. The family moved to Bethesda, Maryland in 1986. Ariane left for New York City in 1999 to study art at Parsons School of Design, earning a BFA in 2004. She lived in some of New York’s alternative neighborhoods, first on the Lower East Side in Manhattan and then in Brooklyn. She worked on her paintings while also developing a career as a graphic and web designer. With her holistic view of the world, she also practiced yoga, meditation, outdoor sports, and swimming. She participated in several exhibitions. In 2018 her work was exhibited in Punta del Este, Uruguay and in April 2019, the Juan Risso Gallery in Madrid presented a solo exhibition of her paintings.