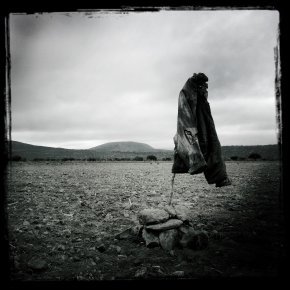 Born in 1971 in México, Alejandro Gutiérrez obtained his degree in visual arts at Escuela Nacional de Artes Plásticas (ENAP-UNAM) and photography at Escuela Activa de Fotografía (EAF) in Mexico DF. He subsequently did doctoral studies in art education at the Universidad Complutense de Madrid (UCM) and received a Diploma in Higher Education from Laureate International Universities. In 1996, he won the scholarship program of incentives for artistic creation. His work has been selected for various exhibitions and competitions, such as the 1st University Meeting of Humanities and Arts (1998), the 2nd Biennial Puebla Los Angeles (1999) and four times in the Estatal de Arte Libertad. Alejandro’s work has been exhibited cllectively in the University Museum of Contemporary Art-UNAM, Leon Trotsky Museum, and the Art Museum of Querétaro. His most important solo exhibitions include Academia de San Carlos, Universidad Iberoamericana, Galería Libertad, Teatro Federico García Lorca in Havana, Cuba and Gallery L’Art pour Lahr in Germany. His photographic work has been published in national and international architectural magazines (Enlace, the Architectural Review). In 2008 he travelled to Mozambique producing a video-documentary with Médecins Sans Frontieres (MSF) about the HIV situation in the country. In 2013 he crossed Cuba cycling and documenting the daily life inside the Island and in 2014 began a photo essay on some urban areas in the jungle of Peru.